The rating of the painters 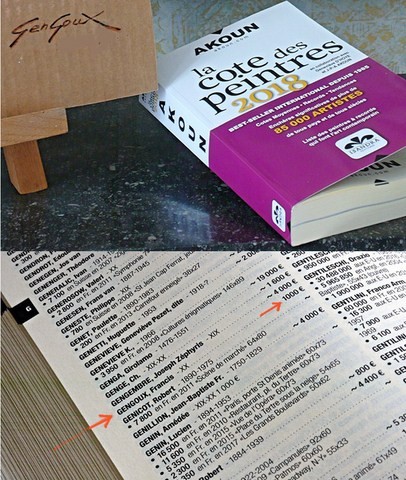 The artist rating improves
as the good wine

Established by a committee of independent experts brought together by Jacques-Armand Akoun, an art expert, Francis Gengoux has been listed in the Akoun Guide since 2018.

This rating is also used for publication in international art market databases.

In an interview with Art Majeur, Jacques-Armand Akoun said: "It allows buyers, sellers, merchants, auctioneers, experts near insurance companies, brokers, museum curators and notaries in estates to have a solid starting point before any intervention. It reassures by situating the artist".

" Hello Johnny, it's Jean-Pierre... Tell me, you remember yourself of this gay painter in London this leech who had dragged us in her studio ?
- Euh vaguely. You know, I wake up hardly...
- Well, it was Francis Bacon!
- Ah yeah, Bacon that has to be this name...
- What you by way of the painting ?
- Then there, I know nothing about it.
- But you make fun!?
- Why, I seem to joke?
- But you know how much that is worth a Bacon? Try to remind you that you were able to make it...
- Bah, I had to rock her in a moving. "
This incredible story is the retranscription of Jean-Pierre Bloch's phone call, friend and private secretary of Johnny Hallyday, to the idol of the young people one morning of winter, 1972.
This anecdote is read with pleasure in the work of Matthias Debureaux : Les dictateurs font très bien l'amour (Editions Nil, 2011).

The opinion of the expert

Certification carried out in collaboration with akoun, the world leader in information on the art market since 1985.